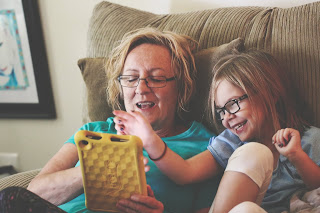 I was chatting recently with a fellow clinician about one of their cases in which a child was spending a significant amount of their recreation time using a computer. This young person was struggling with regular tantrums and was described by parents as “angry” a lot of the time. Sadly, this scenario appears to be occurring more regularly; with children spending more time online or immersed in digital worlds in concert with increased difficulty managing emotion and arousal regulation demands.

There is a lot that can be said about digital media and here I want to comment briefly on one specific aspect near and dear to my own scholarly heart; arousal systems!

I often hear from parents about their children that, “they use [digital technologies] as a way to unwind after the day” or, that digital technologies are a calming strategy for children when distressed. Here’s the thing though- they are not. Digital technology usage is to calming what a salty nacho is to quenching your thirst- it may feel good in the moment but chances are the problem you were trying to remedy is worsened. Digital technologies ramp children’s arousal systems up and often without parents knowing this is happening.

Digital media stimulates children’s brains. In fact, one area of the brain engaged while kids are using digital media- the Ventral Tegmental Area (VTA)- is the same part of the brain implicated in most problematic addiction behaviours. The VTA sits right in the middle of an arousal based reward system. It makes things feel good- really good! It also excites children through speeding the heart rate, releasing energizing hormones, like adrenaline, and shifting the way the brain attends to incoming information.

Content and platforms accompanying digital media are designed to be stimulating. Children using these devices can appear to be calm, and it can even appear as though their nervous systems are sedated, but this is rarely the case. Children’s nervous systems are actually being stimulated and all of that growing arousal is being filtered back into attention on the device.

In part, it is this growing arousal that leads to the eruption of energy when it comes time to take the device away. Taking an iPad away from a child can feel a bit like grabbing the wheel of a car travelling at highway speeds; things get hectic fast. I’m sure anyone who has ever mixed parenting, digital technologies, and a small child can picture some version of how hectic this scenario can get. I’ve had many children misdiagnosed by parents as being “crazy” or under the possession of demons following these moments.

It makes sense that we would want to do everything in our power to distance ourselves from moments like these. So, does this mean we don’t let kids interact with digital media? Here’s the sticky bit- our children are “digital natives” and will grow up in a world where management of this arousal may be essential in many potential areas of success. I argue that part of parenting in a digital landscape, much like in a physical one, is helping to prepare our children to interact with the risks and rewards of that landscape in a way that promotes safety, growth and healthy functioning.

Much like the forces of gravity interacting with a three-year-old keen to use the monkey bars, there are some significant hazards to be aware of when discussing arousal systems and digital technology use. It is expected that early use will require parents holding some of that emotional weight initially. Whether we are talking about digital arousal or monkey bars, without safe practice a child will never learn to navigate that experience safely. Both, when navigated safely, can promote further development and reward. However, when used unsafely, both can lead to detrimental outcomes that can stifle development.

When helping a child to approach something risky but beneficial in the “real world” (a physical environment), parents will naturally reduce the intensity and duration while providing frequent exposure. Take for example the process of learning to ride a bike. The intensity of the risk is decreased through holding the seat, using training wheels, and possibly removing pedals. The duration of exposure is also decreased. One shouldn’t expect a long, physically demanding, and challenging ride to go well with a little person who is just learning to ride a bike.

With the engagement in a new skill parents also allow more opportunities... to do less. Small children learning to ride a bike do better with many brief spurts on the bike as opposed to fewer lengthier practice sessions. I believe these same principles apply to learning the skills of managing arousal on digital technologies.

I often recommend that when giving children time on digital media, we pay attention to three factors: 1) timing, 2) duration and 3) frequency.

Here I am referring to when in the day we are allowing access. Digital technologies are like caffeine in that they ramp up our nervous system- almost like little starter kits for freak outs. As such, how and when they are used can really impact the outcome.

If your child struggles at managing arousal, including anxiety, at bedtime, don’t use the iPad in close proximity to this time. The same applies for school, playdates, and occult séances- or whatever the situation is where what the environment is asking of the child is already close the capacity of that childs arousal system.

Arousal is not an “on-or-off” system either. It is a spectrum- like the revving of an engine- where the effects of something can be additive and lasting. Something highly arousing at 7 am may decrease a child’s coping threshold later in that morning as they head off to school. Use at 5pm, if not coupled with appropriate calming activity, may still have effects at 8pm when it is time for the child to go to bed. If your child struggles with calming, use of digital media should always be paired with a naturally calming activity. Every child has a different arousal system, but here are some activities that may be calming for them and can be used after engaging in digital media: Reading together, a warm bath, playing or listening to music, working on a puzzle, a walk outside, and cooking together.

Selecting the duration of exposure should be a reflective process. Each child has a unique arousal regulation system that we should be aware of. Overall, the American Academy of Pediatrics recommends limits of up to one hour of digital technology time daily for children 3-5 years-old and up to two hours daily digital technology time for children 6-18 years-old. For children struggling with arousal I would recommend a little less time initially and that be doled out in shorter spurts.

Allowing use in shorter chunks of time will limit the level of arousal within each practice. Each chunk of time should be viewed as an opportunity to practice ramping up with the technology and calming down. Further, smaller chunks will lead to more practice opportunities at regulating arousal during and following use. For example- three ten minute periods with non-digital calming between them provides more practice and development than one thirty-minute session and will allow less opportunity for hyperarousal in each exposure.

3) Allow for lots of practice


As noted above, each opportunity to ramp up the nervous system and then to calm is a practice that shapes the physiological systems that control arousal (like hormone reuptake, heartrate, breathing etc.). Increasing the frequency while decreasing the duration leads to both more practice and more control in each practice. Reducing duration and increasing opportunities also allows us to better taper usage and observe the impacts of digital technology on our children. Where it relates to arousal systems, I advocate for more of less; so more practice at a lower intensity (shorter duration and regulated use).

September 10, 2018
There is nothing in this world more important that the people around us and the relationships we have with them. However, life often has a way of distracting us from the things that matter most. My job is an interesting one as I am paid to be a relationship in young peoples lives; some who heartbreakingly don’t have many, if any, other safe relationships. I remember one morning getting a phone call for one such young woman whom I had worked with years before.   “Hi Sean, I’m not sure if you remember me...”- of course I remembered her. I remembered a 15-year-old girl who reluctantly slinked into a chair in the corner of my office with a fixed and unflinching gaze at the ground in front of her. The rhythm of my breath shuddered slightly as she described disappointment in still being alive. A few nights prior to being ushered into my office she had attempted to end her life in moment of intense internal pain and loneliness. “Sean- I know your busy but I was wondering if you have
1 comment
Read more